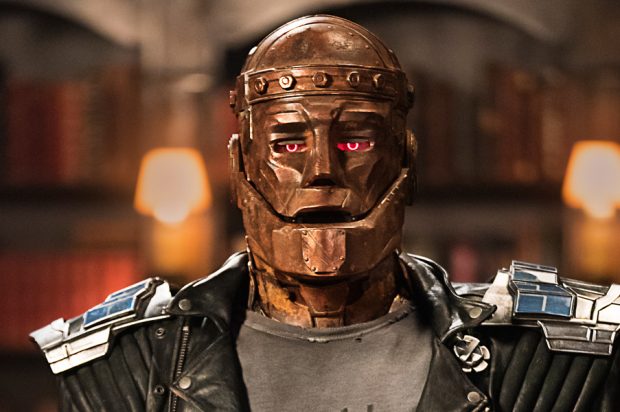 Doom Patrol just wrapped up its first season and so far, it
has been the best thing on TV in 2019. That statement may have many saying “what
show?” due to its availability only being on DC’s Streaming service. Between excellent
casting, an interesting story telling, and solid writing Doom Patrol keeps you
wanting to come back and see what happens next.

If anyone watched DC’s Titans, also exclusive to DC streaming, you got a taste of Doom Patrol in an intro episode. The main difference was the chief being played by Timothy Dalton in the actual show Bruno Bichir in the single episode of Titans. Up in the number one surprised to see, ahem or should I say primarily hear, Brendan Fraser has come out of unofficial retirement to voice Robot Man, the Brain in the metal can. Matt Bomer joins as the bandaged mystery man containing a spirit of energy followed by April Bowlby as Rita, the lady who deforms when nervous. The real surprise and break out character has to be Crazy Jane played by Diane Guerrero.  The girl with 60 different personalities and 60 different abilities does not disappoint! She brings new meaning to the word skitzo. This rag tag group of misfits primarily try to hide and don’t come out into the open until Mr. Nobody, brilliantly played by Ray Nearly, comes to town and turns their world over.

Often shows can be predictable, and that’s not always bad,
but it can be so great to watch a show and not know what they are going to
throw out next. The story was so different than your normal super hero show. At
their core the Doom Patrol do not want to be hero’s, they are a group of misfit
meta humans that want to hide out and have as little to no interaction with the
outside world. Forcing them into uncomfortable situations makes them show who
they really are and they do not always react as expected.  The bizarre of the characters is only rivaled
by the villains and situations they have to deal with.

Hero’s that don’t get enough credit are the writers. The
dialog of doom patrol will not make you cringe or roll your eyes. Maybe some
characters general talking patterns might, but that is by design, not poor
writing and execution.  Hearing Brendan swear
words flow off of such a wholesome actor as Brendan Fraser gives a benevolent feel
of inappropriate happiness.

If you are interested into super hero shows and looking for
something different this is something to add for your list. All episodes are
out now so you can subscribe to DC and binge if that is your thing.