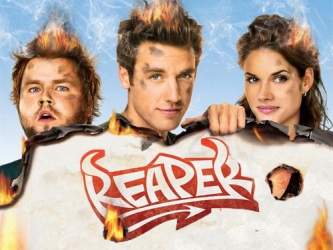 In the spirit of the save Todd campaign going on at indigogo I wanted to write about another show that could use some new life.  I am talking about the show Reaper.  Reaper was another show that got the axe after 2 seasons. It was a hilarious awesome show.  It followed the story of a character who’s soul is owned by the devil and is forced to be his bounty hunter collecting souls that have escaped from hell. Sounds like a an action movie from the early 2000s, but really its a comedy and works quite well.

The stars show Brett Harrison (Breaking in), Tyler Labine (Tucker and Dale vs Evil), Rick Gonzales (Coach Carter), the beautiful Mussy Peregrym (Stick It), and the fabulous Ray Wise (Robocop). Watching Tyler Labines scenes alone are going to provide non stop laughing. Ray Wise’s portrayal of the Devil is a just above and far beyond what would be expected in this type of show. While all the characters had a key part in making the show as awesome as it was these 2 characters really drew me in.

A buddy of mine has started a site to try to bring it back.  Its called reapertvshow,com, It’s not completely finished but its a cool side project he is working on to just try and unite some fellow reaper fans.  He has some character bios, episode lists, a petition to get Gladys out of hell, and even some quizzes to test your Reapers knowledge. Check it out now and save the Reaper TV Show.