Arrow Season 2 has started. I just watched the first episode and I am excited. If you have not seen season one stop reading and go watch it…now…not kidding around. There are spoilers from this point out so please turn around if you don’t want to read them. You have been warned

Season 2 Takes place a few months after the events of the finale last season. Oliver has run away back the island, Moira is in jail, Thea runs the club, and the family business is in trouble. The show opens with Diggle and Felicity crashing in on Oliver on the island after tracking him down. After a bit of convincing the duo drags him back home to try and save Queen Consolidated, but the have ulterior motives.

Back in Sterling City, a number of hood copy cat vigilantes have popped up to fill the void left from the real hood taking himself out of the game. The vigilantes manage to kill the mayor at a fancy party where you learn Laurel is now working for the DA and detective Lance has been demoted from detective to officer.

Thea is kidnapped and Oliver, who has been determined not to put his hood back on, suites up to go and save her. Haunted by his best friend dying and thinking of him as a murderer he focuses on saving Thea without wounding any of her captures. He succeeds and hands them over to Detective Lance who is surprised at the lack of death.

Isabel Rochev (played by Summer Glau) is the corporate take over mogul that has cast her eyes on Queen Consolidated. She has made it clear she is going to take over and dismantle the company to squeeze out every penny possible. All hope looks to be lost with Oliver not having enough money to buy the stock to gain control. No one wants to loan money to a company that contributed in the destruction of the Glades.

A white night appears in the form of Walter Steele to bail out the company and keep Isabel from taking over. Walter makes a point to let Oliver know that they are still family and he is happy he turned to him in his time of need.

This was a transformation episode for the show. All of season one was focused on one goal, that was saving the glades from Malcom Merlin. That arc is a close for now and it’s an important step for the show to reinvent itself. Often times at this juncture shows start to flail and die from recycled themes and story lines that just change names and only sometimes settings. Arrow is going down the right path to not suffer this fate.

We see a huge growth from Thea. No longer is she out getting into trouble. Oliver leaving left her something to be responsible for and she is very into running the night club. She didn’t make a huge scene over Oliver being gone and was very mild when he brought up their mother. Although she didn’t know he ran back off to the island. Last season she probably would have thrown a fit over both.

Laurel has done a complete 180 and is now working for the DA. She once stood for the small guy and now shes on the other side of the law putting them away. Unfortunately for our hero things are only going to get more complicated as she intends to stop and capture the hood at all costs. Tommy’s death made her feel like she betrayed him and she ultimately blames the hood for his demise.

Olie wants to reinvent himself into something else. No longer is he mindlessly slashing off names from a list. He wants to be a hero and he wants a new name. In the name of Tommy he is vowing to not kill, which will most definitely be problematic considering his fighting style and track record. Oliver does not want to fight, but he knows the city needs a hero.

The ironic part of the episode was the fact that Laurel who defended the hood almost unconditionally last season is going after him to lock him up. At the same time her father who devoted himself to stopping the hood now seems to be more supportive of the hooded vigilante. This is leading to a point where the two will engage in the same debate they had all of last season, but they will be arguing opposite sides.

This was a solid start of the season and I am excited for next week to see what happens. 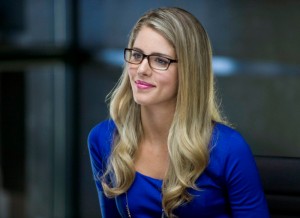 Plus we get to see more of Emily Bett Rickards playing Felicity who is one of, if not the, best portrayal of an attractive girl playing a techie. She is gorgeous but so believable as the awkward IT girl who is becoming more comfortable fighting crime. A lot of the “hot tech girl” portrayals come of as fake and unbelievable, but she is just killing it.

Arrow Season 2 is off to a great start. What are you excited to see?